Considering the staggering size of the Saanich area it has been separated into different municipalities and Saanich West and East are the closest to the core area of Victoria. The neighbourhoods in Saanich West include 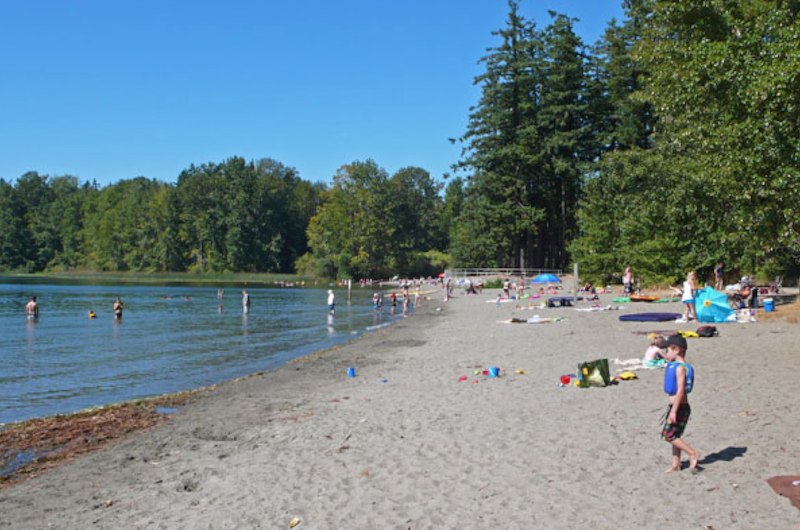 Glanford - A mix of all kinds of residential homes. Located between Carey Rd., Patricia Bay Highway, and Vanalman Rd. It is named for the central thoroughfare of the neighbourhood, Glanford Ave.

Gorge-Tillicum - A mix of lower-middle- and middle-class homes, as well as mixed industrial and commercial neighbourhoods, bounded to the northwest by Portage Inlet, to the southwest by the picturesque Gorge waterway (a narrow channel leading from Selkirk Water to Portage Inlet), to the east by Interurban and West Burnside Roads, to the north by the Trans-Canada Highway, and to the southeast by the border with Victoria, running along Harriet Road. This area has shown evidence of gentrification as homes are being renovated and upgraded.

Interurban - A largely rural area, with some considerable wooded areas still remaining, located to the east and west of Interurban Road. Newer subdivisions are creeping in, but much of the agricultural land is protected. The neighbourhood, lying west of Wilkinson Road and south of West Saanich Road, is home to the Interurban Campus of Camosun College, the Vancouver Island Technology Park (a light industrial park), and the historic Wilkinson Road Jail, a provincial maximum security jail housing sentenced and remanded inmates. Jail was designed by Architect Col William Ridgway Wilson.

Marigold - Bounded by West Burnside Rd., McKenzie Ave., Carey Rd., and Wilkinson Rd. Some farmland, notably "Panama Flats" remains undeveloped because it has been designated a protected parkland. This is part of an extensive greenbelt which also includes the famous Galloping Goose trail. The bird watcher may have a field day here, as the flats provide home to many types of water fowl, hawks and songbirds. The Marigold area is being developed extensively and no longer has many post-war homes. There are many new neighbourhoods and luckily, they have been developed with respect for the multitude of wildlife found here. "Marigold" is one of many "flower-themed" roads in the neighbourhood.

Prospect Lake - A largely rural and wooded area, with some newer subdivisions, in the northwest of the municipality. It lies just east of the Highlands municipal boundary. It contains a number of wooded parks (notably Prospect Lake and Francis/King).

Strawberry Vale - Bounded by Wilkinson Rd., View Royal, and the Layritz Park area. An area in transition, it is a mix of small farms, older subdivisions, and newer subdivisions.

Tillicum Village anchored by Tillicum Mall, built on the former site of the Tillicum Outdoor Theatre, (Old Navy, London Drugs, and Home Outfitters) and the Silver City Movie Theatre Complex, this developing village area is also home the George R. Pearkes Recreation Center and the Saanich Centennial Library. This commercial area also has a collection of small locally owned businesses and restaurants in nearby Burnside Plaza.

Uptown - A largely commercial and industrial zone in the southwest corner of Saanich, next to the Victoria border, between Blanshard St., Burnside Rd., and Tillicum Rd. Residentially, it contains mainly small, post-war, lower-middle-class housing, and low-rise apartments, although many new developments have been built in the area since the redevelopment of Town and Country mall. The municipal hall and two large shopping centres - Mayfair and Uptown - are located in this area.

Westview Heights - A classic 1950s residential subdivision bounded by Interurban Road, Tillicum Road and Carey Road. This area was planned by Gordon Rolston, who was also the planner for the development of Broadmead. Common traits of the area with Broadmead include sloping landscaping, integration of natural features with the residential development, and the construction of quality middle-class homes. The land was originally owned by William Rowland, and is known for its clear views of the Olympic Mountains and the Sooke Hills.

Looking for more information on these areas and the diverse properties either commercial or residential give me a call today or search out new listings in this area below.

Open House Saturday 1-3pm & Sunday 12-2pm! Loved for over 25 years, this home has been updated from top to bottom & is now ready for its new owners. Set far back from the...

Courtesy of One Percent Realty

Courtesy of One Percent Realty

Come and discover this lovely and spacious 4 bed 4 bath home in ever so popular Gordon Head. From the moment you enter, you'll love all that this home has to offer. Large...

“NOTE: MLS® property information is provided under copyright© by the Victoria Real Estate Board. The information is from sources deemed reliable, but should not be relied upon without independent verification. This website may only be used by consumers for the purpose of locating and purchasing real estate. By registering on this website I/We consent to the collection, use and disclosure of personal information as described in our privacy policy.

Looking for the perfect home in the perfect place? Chances are you'll want to check here first.